On September 12, Apple announced the iPhone 5 and said the first customers would receive it on September 21, nine days later. This is a very tricky time for developers as we have no idea how the device will behave. While we have simulators to get a feel for the device, there is no way to know whether the changes we will make will actually look and work well on the device until we receive it. The only thing I knew for certain is that apps that are not enlarged for the 4″ screen would look horrible, or at least they did on the simulator.

To a much greater extent, I had this same problem with the iPad. That was significantly harder, though, as it was a completely different form factor. At that time we decided to wait until the iPad shipped to expand powerOne to work with it, or at least that was the plan. In the end we had product on day one only because of Apple’s generosity.

For the 4″ screens we decided to throw caution to the wind and expand the app. Turns out it was the right move as the simulator was a fair representation of the taller device. (It also turns out that at least on the black iPhone 5 the 3.5″ screened apps don’t look bad at all.)

The first thing we did is add the extra splash screen graphic Apple asked for. This is what tells iOS that the app works in full screen. Very elegant solution on Apple’s part. Once added, we could see right away what worked and what didn’t. All but three screens — the portrait and landscape calculators plus graph view — worked. For graphing it turned out that the screen coordinates were hard-coded. That was an easy fix as now we just query for the device size instead.

The calculators were trickier. We had to make a fast, near-term decision about what to change and we had to make sure whatever we changed didn’t have a massive impact on the rest of the view and app as we didn’t have much time to test it. We had 11 apps to get back to Apple and all be reviewed before the iPhone 5 came out. [1]

We basically had two choices for the portrait calculator: expand the view window or expand the buttons. We decided the buttons were easy enough to hit at their size and thought having an expanded view window, especially for RPN customers, would be nice. You can now see four stack rows before scrolling. This also happens to be the least impactful thing to do from a coding perspective.

For the landscape calculator we thought about a number of possibilities, including moving the navigation buttons and some other possibilities. In the end we decided that the biggest problem with landscape calculator is the button size, especially for 0-9 and the basic math functions. There we decided to expand those buttons to fill the extra space, which also enlarged the view window a bit. 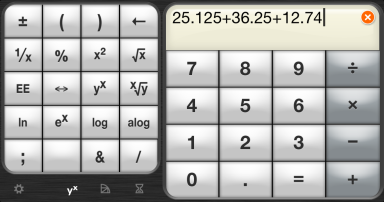 Of course, I had no idea until Friday the 21st what any of it would look like. After all, the simulator gives me an idea but it isn’t until I put it on a device and play with it that I know whether the changes were effective. I’m happy to announce they are, especially for landscape calculator. It in particular is significantly easier to use.

[1] Why the rush? Partly because powerOne was badly broken on iOS 6 and we had to get a release before it shipped on Sep 19, two days before the devices arrived. I really didn’t want to do two releases so close together.